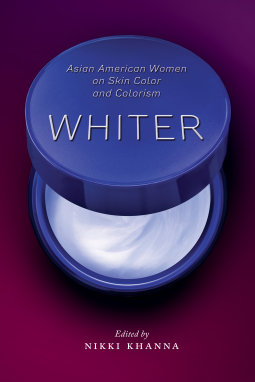 Throughout Asia, Africa, Latin America and the Middle East, skin-whitening advertisements promising “ugly duckling to swan” transformations are pervasive. While they are provocative, controversial and racist they are extremely effective in marketing and sharing the widespread belief that ” light skin is beautiful”. It is on this premise that Nikki Khanna dissects colourism in Asian culture with a focus on Asian-American women.

In Whiter, Asian-American women share their experiences with colourism, these beliefs were passed down through their families, more so by the women in their families, they also note the role of colonialism, culture, media in propagating these harmful beliefs and stereotypes. Khanna notes that there is a lot of literature on colourism among African-Americans but fewer studies have been done among Asians.

She notes that term colourism was first coined by Alice Walker in 1983 and refers to light-skinned people being privileged over dark-skinned people- both between and within racial communities. Qualifying “tests” such as the paper-bag tests have been used to control memberships or access to various privileges among people of colour.

Light skin is privileged over dark. The growing body of research on colorism among African Americans, Latinx populations in the United States, and Asian Americans reveals that one’s shade of skin is linked to educational attainment, employment, occupational status, income, wealth, physical health, mental health, and marriageability, as well as perceptions of intelligence, social class, trustworthiness, and attractiveness

A Cambodian-American contributor noted that:

I have asked around about why Cambodians are so obsessed with having pale skin. The answer: It’s common among Asian cultures to find light skin more alluring and attractive. Light skin means a person comes from a wealthy family—that he or she spends most of the time indoors and works less than others. Lightskinned people live sheltered lives. Light-skinned girls have more chances to marry, and an increased likelihood of marrying into rich families. Meanwhile, dark-skinned people are associated with the lower class because they must work most of their lives, often under the blazing sun. People seem to be proud of not having to work…

The book also highlights the false equivalency better tanning and skin-whitening practices because it ignores the power dynamics that make light skin desirable for people of colour. Social advocate Sabina Verghese calls tanning a “social luxury” for white women. Tanning (whether from the beach or from a spray can) is seen as a “healthy glow” or evidence of a great vacation. Light, white skin is powerful and is associated with increased opportunities and privilege; tanned skin, though a beauty norm in the West, does not hold the same power. They quote African-American comedian Chris Rock in a 1999 stand-up routine:

The book highlights the interesting example of the 2018 hit movie, Crazy Rich Asians that was the first film in 25 years to have an all-Asian cast movie in Hollywood. Despite being filmed in Singapore where 22 per cent of the population is Malay and Indian, the movie was criticised for lacking “brown” actors and actresses. Critics noted that it represented a single version of Asia that is ‘palatable’ for Hollywood.

On moving forward, one of the contributors notes:

The solution is not only practicing self-love but also increased diversity in media and increased acceptance within our own communities. There are very few celebrities in Asian films and television with dark skin unless they are cast as the villain or in some demeaning role… Being beautiful and being light-skinned are not mutually exclusive, and we can all work toward shattering this belief by viewing and treating every person of every hue equally and calling out other people who promote colorism. Nobody deserves to feel like a foreigner in her own culture, and neither do I.

Whiter provided an interesting perspective and connected the dots about various observations I had made about beauty and colourism among African and Asian women. As an African, I was hurt by the notion that being dark-skinned has negative connotations across all cultures. Nonetheless, it provides a lot of material for conversation starters about colourism and racism among Caucasian and Asian people. It bolstered the need for women to drive the colourism-conversation with their daughters and young women in families and extended circles from a young age.

I sense that book was originally a thesis or research project because she introduces every chapter which renders the content a bit repetitive and over-explained. Also, she sampled stories from women mostly in academia which in a sense limits the diversity of professions. Still, that does not diminish the content in any way. In fact, it will help vanquish the stereotypical jobs that are associated with some Asian cultures. Whiter is a timely book and will be a great starter for anyone interested in racism and colourism.

The Gilded Years by Karin Tanabe

Note: I received this ARC from NetGalley in exchange for an honest review.