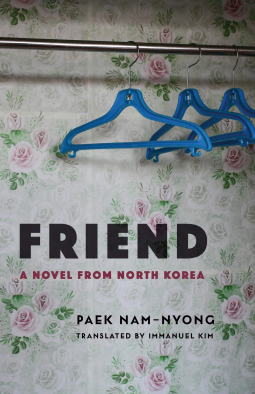 A woman in her thirties goes to the courthouse to file for a divorce, where she meets an eccentric judge who has to investigate her case before finalising it. Paek examines love, marriage and divorce in North Korea in the 1980s through the lives of the main couple as well as the Judge who is also undergoing his fair share of marital problems. Through a series of flashbacks, monologues and various media, the author examines how a couple gets together, how marriages deteriorate and possible ways to remedy the situation (or not).

Friend is written within the broader political context of the North Korean nation which largely viewed one’s public life as a reflection of their private life. It was interesting to note that everybody in society (work colleagues and supervisors) had a say in an institution that was primarily supposed to be only between two people. The author does a commendable job in addressing the inner struggles of the characters in the marital context as well as a part of society. Readers will appreciate the afterword in the book that provides insightful information about life in North Korea.

Though first published in 1988, Friend provides a glimpse into the married lives of everyday North Koreans and is a great conversation starter.

Reviewer’s Note: This eARC was provided by Columbia University Press via Netgalley in exchange for an honest review. Thanks!