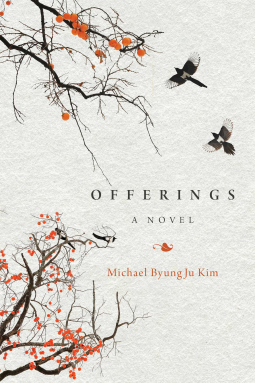 Dae Joon/ Shane is a Korean-American investment banker who finds himself back in Seoul as a part of an international team that is trying to rescue South Korea from sovereign default during the Asian financial crisis. Dae Joon believes that he can make a difference in his work and break free from family tradition. His father believes that as a jangnam (firstborn son), he should stop playing with money and get a PhD instead to become a scholar like many in his family.

Let me be honest, one of the main reasons picked this book because of the pretty cherry blossoms on the cover. Little did I know that this roman à clef is by one of the richest men in the world!

I loved that Kim went back in forth in time to show the  ‘insider-outsider’ dynamic;  growing up as an Asian immigrant in the US in the 1970s and 1980s and his links with Korea as an adult. He does a good job of explaining Korean history and culture without overwhelming the reader. Readers will enjoy the insider perspective of whats it is like to bail out a country from a financial crisis. While most millennials recall the 2007/8 financial crisis, the 1997/8 Asian financial crisis occurred at a time when the world was not as interconnected as it is in 2020.

While this book did not grab me as much as I had hoped it would, I am glad that I read it. It cemented my knowledge of the unique aspects of South Korea’s political economy and cultural traditions. and got me curious about events like the Gwangju uprising. Reading parts of his childhood reflections convinced me that Kim would make a great book with a child narrator that addresses serious issues in the Korean context.

Offerings will be a great read for fans of  Min Jin Lee, Michael Lewis and anyone interested in South Korea. Let me add, in case this book gets turned into a Kdrama movie or series, I would highly recommend the same production team or at least screenplay writers from Misaeng. I am looking forward to what Mr Kim has to offer in the future.

Editor’s Note: This book was kindly provided by the publisher as an eARC via Netgalley