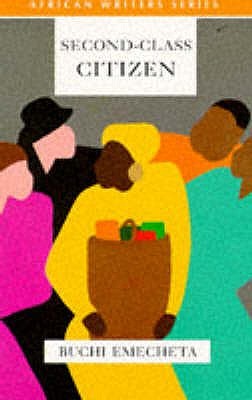 Adah, a woman from the Igbo moves to England to live with her Nigerian student husband. She soon discovers that life fora young Nigerian women living in London in the 1960s is grim. Rejected by British society and thwarted by her husband, who expects her to be subservient to him, she is forced to face up to live as a second-class citizen.

Emecheta relives her life through Adah to let readers know what it was like to be a second-class citizen based on one’s gender and race. Despite her efforts to better herself so that she can make both her nuclear and extended family more comfortable, Adah was still regarded as a means to an end (wealth), rather than a personal treasure.

Buchi communicates simply but with the emotional gravitas to make the reader reconsider the themes that she raises. One instance that is seared in my mind is during one of Adah’s pregnancies. her husband Francis waxes philosophical about the virtues of a Proverbs 31 woman that he expected his wife to emulate. Ironically, he does not match any one of the expected virtues. It is quite clear that time and time again, Adah tries to process her experiences based on her religious upbring and African traditions. This got me thinking about expectations that we set for ourselves in marriage and the room we leave for the (un)healthy influence of religion and societal norms.

Though this book was written in the 1970s, the themes of female independence, racism and freedom gained from education have not ceased to be relevant in 2010s. This book left me with so many feelings. Knowing that this was Buchi’s actual story broke my heart but left me impressed with her courage and tenacity. This was one plucky woman.

I would recommend Second-class Citizen if you are interested in Nigerian literature but you have been intimidated with which author to start with. You would also like this one if you love Chimamanda Ngozi Adichie’s work.  But you would have to bear in mind that it is a product of its time. It would provide great fodder for a book club meeting and you would also need to your annotating tools.

One thought on “Second-Class Citizen by Buchi Emecheta”