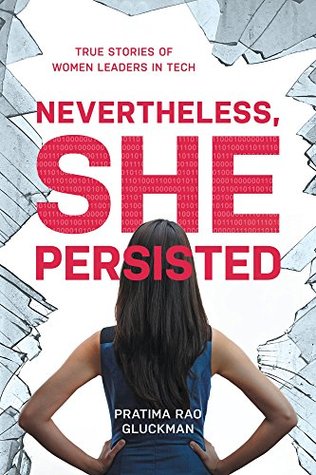 “Technology is changing our world. Many of the most important revolutions that will take place in the next fifty years have technology at their heart. Women, 50% of the population, still only make up between 20-25% of the technology workforce.”

This is one of the most quoted statistics when discussing gender and labour issues or at least some variant of it even in the FAME* fields.  As a woman in tech (WIT),  Pratima Rao Gluckman gives faces to these numbers by highlighting stories of 19 female tech executives. Through her interviews, she showcases women from diverse backgrounds and who had different entry points into the world of technology and how they handle different obstacles to make 20-25%. She asks them what made them decide to study computing or engineering; their important inflexion points and the important decisions they had to make especially when asking for what they wanted.

The book is structured into 19 chapters with beginning with each executive’s life story and career trajectory. Then she picks a specific topic or theme which she discusses further whilst backing with social studies or referring to other illuminating books. She addresses common stereotypes and how these women have to overcome them and continue to succeed. For instance, Pam Kotska, CEO of a stealth start-up had earned the name “dragon-lady” because she was aggressive at work. Pam prefers to be known as assertive and prefers to be known as the one who delivers candour without malice.  As  Gluckman comments on this double standard by noting, “Women in the position of authority often get derogatory epithets, when men are tagged with  positive or neutral bynames (often military in origin)…whereas men with the same communication are not going to be labelled  in the same way”

Gluckman highlights various gems from their stories and will be useful for women who are keen on climbing the corporate ladder whether or not they work in STEM**. She and other women interviewed in this book constantly underscore meritocracy is not as straightforward as we would like it to be. In addition, having marriage partners who are involved in domestic matters and child-raising can’t be overstated. Notably, Pratima’s husband was a stay-at-home dad for seven years so that she could grow her career, write this book and handle other career obligations.

In the strict sense, Nevertheless, She Persisted is not ground-breaking but it is a wonderful collection for women in tech to mirror themselves against. Men in tech should also read this book so that they are enlightened on the overt and systemic biases that exist so that they can also make their contributions.

Note: This book was provided by the publisher via NetGalley. All opinions expressed are mine