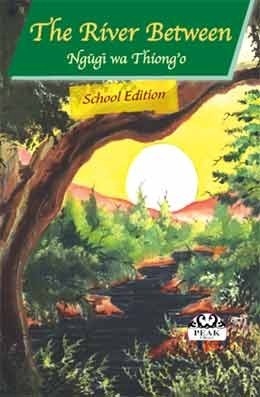 Title:  The River Between

This book talks about how the Kikuyu people from Central Kenya dealt with the coming of the British settlers; first as Christian missionaries, then as the government establishment. Some of the natives became puritanical Christians and renounced their customary beliefs and traditions. While others like Waiyaki, the main protagonist were in-betweeners who believed that the best way to conquer one’s enemies was to learn their ways. Prof Ngugi dives into Kikuyu folklore which explains their origins and provides the foundation for their traditional systems and their resistance against the colonialists.

The Gikuyu were not sure who to trust since they introduced some benefits like western medicine and education but were also confused by the new religion and government initiatives like hut taxes which were against their established structures.  From history, it is evident that when the British Empire finally took over East Africa, it was clear that they did not have respect for African customs which Waiyaki clearly articulated in this anecdote; a welcomed visitor who ousts the head of a house. Hence, Waiyaki’s father, Chege advised him to “Learn all the wisdom and all the secrets of the white man. But do not follow his vices”.

One of the central themes in The River Between is the tug of war between those who are pro- and anti-female genital mutilation (FGM) after receiving Christian enlightenment. The Kikuyu believed that both male and female circumcision was a means of remaining connecting to the community. On the other hand, with the coming of missionaries and colonialists, they were able to show the dangers of this community practice particularly to women in the community. This stirred a controversy about among the main characters who wanted to belong but could see the dangers of their women undergoing the “cut” and early marriages. While FGM is now an unacceptable form of initiation, some communities in Africa and other parts of the world still practice it without considering the devastating repercussions like obstetric fistula and even death.

This is my first Ngũgĩ wa Thiong’o novel. I am not quite sure why it took so long to read his work. However, I am glad that I finally did. As they say, better late than never. I was able to connect the book’s themes with my history lessons and provided a more realistic perspective about the rise of the Kikuyu Independent Schools and similar movements during the colonial years. This is a particularly short text but since it has been branded as a school edition, I am not sure how different from other editions. Nonetheless, The River Between is good “own voices” introduction to people’s frame of mind during the colonial era. I do look forward to reading more of his works in the near future.

One thought on “The River Between by Ngũgĩ wa Thiong’o”