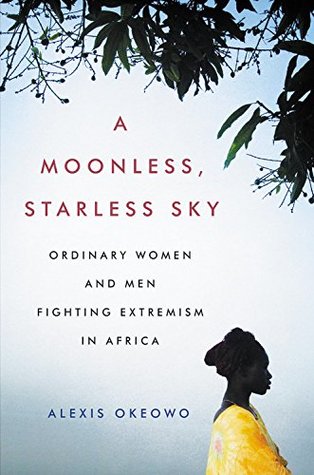 Alexis never really felt connected to the African continent until she took up a 10- month internship in Uganda. This prompted her to dig deeper into the people’s issues and share stories from different parts of the continent. In Mauritania, Alexis encounters an anti-slavery campaigner who receives a lot of backlash from his government, a Ugandan couple whose lives were changed by Joseph Kony’s Lord’s Resistance Army (LRA),  a Chibok escapee and Somalian girls who use basketball as their lifelines under the al-Shabaab.

A Moonless, Starless Sky is divided into two sections where the reader gets to the life of these courageous men and women before and after these life-changing experiences and how they attempt to normalise their lives.

Much of the spotlight has been on Rwanda because of the 1994 genocide and the countries with conflict minerals especially in Central Africa as well as in Sudan.  But I was keen on learning more the reintegration of perpetrators and victims of atrocities back into society and the supporting socio-political institutions.

After reading about mass atrocities in Rwanda and the Jewish Holocaust, Okeowo was able to succinctly articulate in this book what I had not been able to when she says “it is not simply a matter of victims versus perpetrators…Nearly everyone recognised that perpetrators were also victims” because hate can only beget hate. Mauritania, in particular, got my attention earlier in the year when I came across a Quartz article on the prevailing slavery situation, despite it being the last country in the world to abolish slave trade.

Similar to The Girl Who Beat ISIS, this book will definitely make you commiserate with the men and women who have gone out of their way to live their normal lives. But at the same time, the reader will get angry at the state of the world and how a swathe of the global society still holds on to some regressive ideas.

Overall, I am pretty sure that when you pick this book you will gain a broader and more in-depth own voices perspective on some of the issues that plague the African continent and how some brave people have taken the matter into their own hands. It will make want to appreciate your life no matter how mundane you may perceive your life to be. Hopefully, A Moonless, Starless Sky will spur you to make a difference in other people’s lives even by gestures in your own community.

Note: This book was provided by Hachette books via Netgalley in exchange for an honest review.