Where We Belong by Lynn Austin 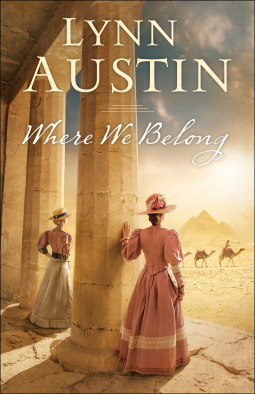 Title: Where We Belong

Where We Belong is set in the 19th Century and focuses on the lives of two socialite sisters (not by today’s definition) who are eager to live beyond social dictates. Having lost his wife while the girls were still infants, Mr Hawes did not spare any expense in raising his daughters, Rebecca and Flora with the best things in life. But as they come into their own, they are keen on exploring the world and locating a Biblical manuscript. Along the way, they encounter Soren Petersen and Kate Rafferty who accompany them to Egypt to locate this manuscript but all four of them are each battling with ghosts from their pasts.

I loved that Austin created strong female characters in Rebecca, Flora and Kate in the way that they addressed pressing gender issues of the day: financial independence, education and marriage. She also did not shy away from addressing fundamental and highly controversial Christian beliefs such as the case for creation. Though I found Rebecca was not was as flawed as the other characters and was always keeping others in check which I mentally ruled out as the first-born syndrome since she had to be the responsible elder sister.

Ms Austin was inspired by the true story of twin Scottish sisters of Agnes and Margaret Smith born in 1843 who used their privileged background to self-educate and went on to contribute to historical findings. They were able to become remarkable scholars in an era when advanced degrees were not available to women.

The fictional and real characters gave me a lot to chew on. One phrase that stuck with me that Ms Austin borrowed from the Smith Twins’ motto: God knows when the end of our days will be. We have nothing to fear.  For the sisters, they knew that where they belonged was within God’s will so they could focus on living their lives well despite societal pressures of settling down. This book would be a great conversation opener or a book club read on Biblical womanhood and its relevance for the times that we live in.

You might also be interested in a mini-review of Lynn Austin’s Until We Reach Home that made my 2017 Favourites So Far list that I made a few months ago.

Note: This book and book cover picture were provided by Netgalley in exchange for an honest review