Leopard at the Door by Jennifer McVeigh

Leopard at the Door is a Bildungsroman about Rachel who returns to the Kenya in the early 1950s after spending six years in England. She is excited to reunite with her widowed father, her old friends on their farm and revive her childhood memories but finds that everything has changed. 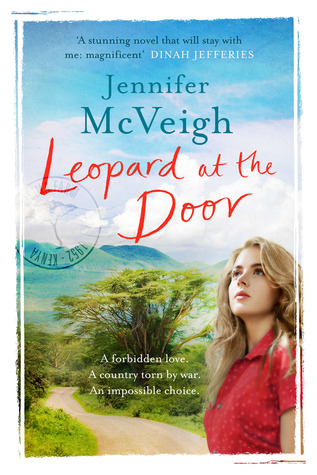 Title:  Leopard at the Door

One of the goals that I set for myself at the beginning of the year was to read more Kenyan authors and books around our history. But it seems that I am going to be hard-pressed for time. One good thing though, I am proud that I am making progress with my Netgalley queue. I have to admit that I was pretty excited when I received Leopard at the Door for review from Netgalley after hearing about it on Diana’s blog

Leopard at the Door is a Bildungsroman about Rachel who returns to the Kenya in the early 1950s after spending six years in England. She is excited to reunite with her widowed father, her old friends on their farm and revive her childhood memories but finds that everything has completely changed. The situation is further exacerbated with rumours of the Mau Mau guerilla warriors moving closer to their area.

The story is well paced and McVeigh does a good job of weaving in historical facts with the plot line.  I did get emotional in some parts of the book, when the settlers referred to the Africans as savages. Well, at least some characters like Nate Logan are the plight of Kenyans who recognised how the settlers disrupted their previous organisational and cultural systems.

Relatedly, there is a scene where Rachel’s love interest Michael, shows her textbook and informs her that there are efforts to whitewash the material that was being taught in the African schools. In particular, he highlights the fact that they were writing the various explorers were the first to ‘discover’ various landmarks such as Lake Victoria insinuating that there were no people living in that area and a basis for the White colonialists to take Africans’ land which is quite false. To be quite honest, while I was rote learning my historical facts, I had not given much thought to the implications of using simple words such as ” discover”.

As I have shared earlier, I took humanities/history electives as part of my minor undergraduate courses. These definitely sparked my curiosity about some details that seemed to have been excluded in our curriculum. For instance, I never had about the Wagalla Massacre until I saw it in news segment a few years back and then again in Nina Munk’s The Idealist.

Leopard at the Door has given me a lot to mull over. For instance, I am still trying to figure out the various metaphors like the title, the Hansel and Gretel reference and the radio transmission of Queen Elizabeth’s coronation. But more importantly the World War II  and Kenyan Independence legacies whose repercussions are still being felt in the country to date. I would love to discuss it but I am a bit apprehensive about spoilers for other readers. So this would definitely be a great book club recommendation.

Overall, I think that this is a good for anyone who would like to be eased into colonial Kenya history and might not know where to begin. This book definitely brought to life the many history lessons that I had ages ago. If you would more details in terms of non-fiction, you could probably read David Anderson’s History of the Hanged ( I got a copy at Prestige Bookshop- Nairobi but you could also check Books First, now at Tuskys). She acknowledges Anderson in her credits and to be quite honest I started this book but quickly discovered it is not a book to read while commuting.

I read Elspeth Huxley’s The Flame Trees of Thika last year which is also a coming of age book but to be quite honest, I can hardly remember bits of it. So hopefully I can re-read it soon along with Paula McLain’s Circling the Sun and possibly do a comparison review post.

3 thoughts on “Leopard at the Door by Jennifer McVeigh”