August was Women in Translation month. Though I found out about it a bit too late, it proved to be the perfect time to finally read Life from Elsewhere that had been gathering e-dust in my Kindle library. 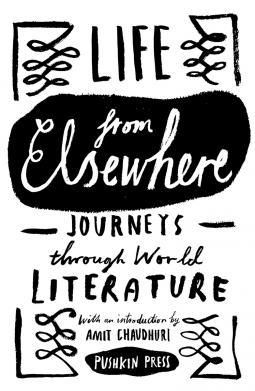 Title: Life from Elsewhere: Journeys through the World Literature

August was Women in Translation month. Though I found out about it a bit too late, it proved to be the perfect time to finally read Life from Elsewhere that had been gathering e-dust in my Kindle library.

The essay collection is made up of translated essays by famous authors such as Alain Mabanckou and Elif Shafak who highlight pertinent issues of our time: immigration, globalisation and (lack of) diffusion of culture. Majority of the authors are from emerging and developing countries with histories of oppressive regimes and contributed to their flight to the diaspora. Essays do not follow a similar structure as they recount significant experiences that influence how they approach their craft.

It was quite clear that writers supported the need for appreciating different cultures and histories in order for humans to continue co-existing peacefully.  Thanks to technology we are able to learn about different culture through various form of media.

Chan Koon Chang emphasises that though culture is extremely complex to understand, even for those who own it, giving up is not an option. Stereotyping in particular further exacerbates the situation because it only further creates more barriers.

To understand a culture is difficult, even for a person embedded in that culture. To understand another culture is more difficult, if not impossible. But giving up is not an option. As the always perceptive Chinese novelist Chang Ailing once said ‘Only with the understanding will there be empathy.’ This is a conundrum faced by our densely layered world. -Chan Koon Chang

Nonetheless, it will be important to appreciate what journalists and authors go through in order to actually get those stories. In addition, there’s need for local people to share their stories and their perspectives to prevent misrepresentation and sensationalisation.

Building on my own experience, there’s so much of our history that with our grandparents and parents because they have not codified in literature.  In the past, a lot of the stories were shared through passing down of oral traditions, but with rural -urban migration and intermarriages, language and some cultural aspects will be forgotten with time. Even going to the museums is not a thing anymore.

As 2017 is an election year, I have been looking out for books on Kenyan history actually written by fellow Kenyans but they are few and far between.  This actually brought me back to the fact that one author highlight that periods of literature in most cases are distinguished by war occurrences

It is important to put yourself in situations where you can be able to break the stereotypes and narratives about other people.  One of my pet subjects is learning about China since the jury is still out on it’s Africa’s new coloniser. I am taking the initiative to learn more about their activity on the continent through reading and listening to podcasts. I am not keen on picking up the language but it will be more crucial to learn about their business ethos as they continue to stream into the country.

The book achieved its goal of at least illuminating the complexity of culture and translated works and anyone who has interest in writing and literature, in general, would appreciate this collection. Though this book is quite short,  it is best savoured within reading sprints due to the heaviness of the content, which would make the reader pause regularly to reflect on the matter.

The book would be a great gift for someone in the publishing arena so that they can be challenged to look for more of the untold stories in Kenya. The future generation will thank them. I will definitely take the initiative to comb through my TBR pile to locate more translated works, especially from non-Anglophone African countries. I might just find another hidden gem like Mariama Ba’s So Long a Letter.

Note: I obtained this book and photo from Netgalley in exchange for an honest review.

One thought on “Life from Elsewhere by Amit Chaudhuri (Ed)”

Leave a Reply to The Past Due Book Review Cancel reply