The Gilded Years by Karin Tanabe

Every once in a while, I decide to live dangerously by picking up that I have never heard especially when they are a recent release that no one has talked about in the book blogosphere and/or booktube and getting me acquainted with topics that I had never heard about. 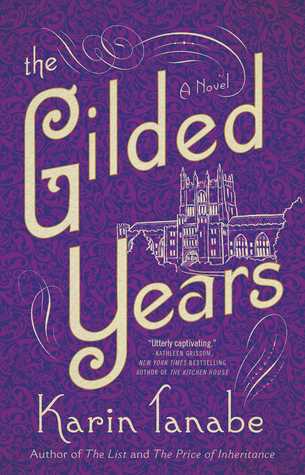 Every once in a while, I decide to live dangerously by picking up that I have never heard especially when they are a recent release that no one has talked about in the book blogosphere and/or booktube and getting me acquainted with topics that I had never heard about. I am so glad that I was not disappointed by  Karin Tanabe’s The Gilded Years

The blurb from the back of the book tells of Anita Hemmings who was the first African-American woman to attend Vassar and no one knew about it. She is able to camouflage or “pass” as a white person due to her olive complexion and dark hair and weaving a rather intricate web of lies about her not so glorious heritage as the daughter of a janitor and the descendant of slaves. However, she is presented with a new challenge in her final year when she rooms with Louise “Lottie” Taylor, who is from old-money. Anita is then torn between trying to keep her secret so that she can graduate from her dream school or to risk everything to nurture a budding romance with a moneyed Harvard student while rubbing shoulders with the elites of New York,

The title is borrowed from the time period, the Gilded Age which is thought to have been coined by author Mark Twain to represented by economic progress that seemed to almost others to the hard and sad issues of racism and abject poverty that other lower class citizens faced. The Gilded Years set in North America just before the turn of the 20th Century at a period when the country is rapidly industrialising due to the discovery of fossil fuels which is accompanied by the building of the railroad to connect different parts of the country. This is coupled with growing importance of finance created wealthy industrialists such as the Andrew Carnegie, Henry Ford, Cornelius Vanderbilt, J.P. Morgan and John D. Rockefeller. On the social scene, migrants are flooding in from all over the world to gain new fortunes in the land of opportunity but at the same time, the abolition movement is gaining steam.

This book drew my attention to the issue of coloured people who were “light-skinned” enough to pass white people and used this to their advantage to access privileges that they were denied because of their race, which is something that I have never heard about. Anita is not a perfect character and she is constantly comparing herself with her friends who were also “high-yellow” but had decided to be recognised as black. Thanks to Lottie’s extreme chattiness, they are forced to debate Plessy versus Ferguson, Supreme Court case over the separation versus the equality of races. In this case, Homer Plessy was a pale-skinned Negro shoemaker from New Orleans was made an example for pleading guilty to being a Negro boarding a white car.  This debate takes a heavy toll on Anita since she has to take the Ferguson side debate from a white man’s perspective and in a sense seemed like a form of preparation for what she would have to endure the rest of her academic year.

As I read this book, the one thing that kept on ringing in my mind was former US President Barack Obama’s 2008 acceptance speech. I can still remember seeing the faces of all those people who never thought that it was possible to ever have themselves represented in one of the world’s most powerful offices and all of the struggles that they had been through and things have come full circle. Though I am not an African-American, I live in a  lower middle-income country which is going through its own form of gilded age; Kenya is fast becoming a technology and financial hub while oil exploration is still ongoing in northern parts of the country. All the while, we still host one of the largest slums in Africa (if not the world) in the capital and tribalism continues to haunt us.

This was quite an emotional read for me. I may not come from old or new money, I still very privileged to have gotten a good education and do not lack basic needs. It made wonder what I would be willing to sacrifice in order to achieve my most heartfelt desires. Like Batman, I believe that I can use my resources to make the world a better place.

Ms Tanabe has also made me wonder about life in colonial Kenya because a lot of the narratives that I have come across are mostly from white settlers and not from Africans or Asians (now Indian-Kenyans). If you do have any good recommendations, please do not hesitate to share. I am currently eyeing Memoirs of a Muhindi which is based on post-colonial East Africa and how these countries reconstructed after the British left EA  and African leaders took over.

This is a book is a timely read in 2017 as nations are still grappling with severe inequality issues while striving for nationalistic ideals. It goes without saying that I will definitely be picking up the author’s other books like The Diplomat’s Daughter which I tend to believe one note some similarities with a few characters in The Gilded Years.

If you liked this book, you would probably like Sue Monk Kidd’s The Secret Lives of Bees and The Invention of Wings, Lynn Austin’s Until We Reach Home, B.J. Hoff’s Land of a Thousand Dreams and Dear America Series: Anetka’s Diary.