Capital and the Common Good by Georgia L. Keohane

When markets fail to produce broad-based and sustainable public goods,  it is up to governments, multilateral agencies, philanthropists and well-wishers to step in and save the day through innovative finance. 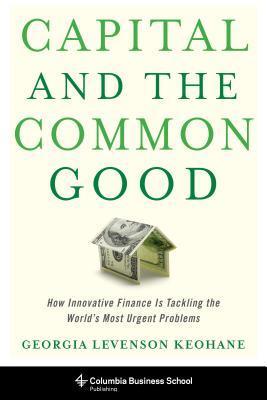 Title: Capital and the Common Good: How Innovative Finance is Tackling the World’s  Most Urgent Problems

When markets fail to produce broad-based and sustainable public goods,  it is up to governments, multilateral agencies, philanthropists and well-wishers to step in and save the day through innovative finance. As the name implies, innovative finance involves seeking alternative and additional resources to invest in solutions to the plethora of common problems faced by the global community.

Ms  Keohane considers a number of reasons for the shift towards innovative finance. First, previously development issues have mostly been funded by official development assistance (ODA) but this has been decreasing over the past couple years, rich Western countries have not contributed in good measure due to the fiscal constraints, global economic slowdown and even the issues in China.

Second, the philosophy around development finance has also shifted with a decreased appetite for overseas engagement especially as wealthier countries seek to revive their own economies after the 2007/8 global financial crisis.  Third, developing countries who are major ODA recipients have also come out strongly in voicing their want and need more for autonomy in determining their own development agenda. Fourth, many economists (including Henry and Arslanalp ) have argued that debt relief programmes that were supposed to assist some of these countries have not delivered favourable success rates.

[Note: In case you are interested in leading more on the shifting global financial architecture, see  Jean-Michel Severino and Olivier Ray ‘s  The End of ODA I and II]

Fifth, this has seen increased securitisation of assets, especially in developed economies, which involves the pooling of multiple and diverse revenue streams into one security that can more raise funds from the capital markets.  Lastly, rapid growth in mobile technology has been a source of financial disintermediation allowing borrowers and lenders to have direct interaction without the need for banks and their fees like in the case of the Kenyan Mpesa platform.

Her arguments are based on assigning ownership rights (or private property rights as economists call them) over a particular resource to increase levels of accountability and responsibility. This means that individuals can be compensated when other firms and individuals violate their rights in the way or the other. These rights create price signals that can be assigned the monetary value that makes them transferable has seen the growth of pay-for-success financing such green and social responsible bonds, microfinance, cap and trade systems among others that encourage sustainable development.

Early on in the book,  she cites the interesting example of the Reducing Emissions from Deforestation and Forest Degradation (REDD) initiative in the Norway-Brazil case where Norway pledged USD 1 billion to Brazil for verifiable evidence that they had reduced deforestation. Keohane notes that this mechanism allows for local governments to design policies and policies that will achieve their desired results. This led Brazil to favour the creation of the Amazon Fund rather than the deal hinging on market-based tradable offsets which some have argued, gets developed countries off the hook. However, good governance is not assured as part of the process. This case sparked heated debates among scholars and practitioners on the advantages and limitations of the pay-for-success financing mechanism (which she discusses towards the end of the book).

I was pleasantly surprised that she highlighted the example of first ever IFFIm* Sukuk in November 2014. Sukuk are Islamic bonds (Sakk in singular) issued in line with Shari’ah principles which focus on profit and loss sharing rather than charging of interest while avoiding excessive risks and financial activities prohibited under Islamic principles  (e.g. gambling and alcohol). This was a landmark bond issue since USD 500 million was raised for a social purpose in the Islamic capital markets (which also garnered a number of accolades). It was also demonstrated the possibilities in local or regional ownership of development finance as the Sukuk participated because approximately 50 percent of the vaccinations  IFFIm funds occur in Islamic states. Though Islamic finance is still perceived as a niche market, it presents a wealth of opportunities in terms of financial inclusion and sustainable finance in general as exemplified in IFFIm Sukuk case study.

Keohane presents the case for innovative finance in a very digestible and convincing manner and backs up her arguments with plenty of current case studies both from the developed and developing countries. Further, she presents both successful and not-so-successful ones which balance out the innovative finance narrative. I think that it would have been interesting to read some case studies from China and Japan since they are financial powerhouses. But then again, you can’t fit everything into one book.

I would agree with her that innovative finance is not a magic bullet to the world’s urgent problems (as the cover suggests). This book serves as a report card of sorts which can be used for reflection for various stakeholders in the sustainable finance space and probably inform them on possible opportunities. This would be a good book for someone interested in the basics of  Development Finance and Economics 101.

Note: Digital review copy was provided by Netgalley in exchange for an honest review

*IFFIm stands for International Finance Facility for Immunisation. Funds raised are utilised by GAVI Alliance, a public-private partnership to provide vaccines to the world’s poorest countries.

One thought on “Capital and the Common Good by Georgia L. Keohane”